You Are Here: Home → A microalgae perspective to enhance the sustainability of food production – SABANA Project

SABANA project was launched at December 2016 for the implementation in Almería of an Excellence Center for research and development of microalgae biotechnology. This is a four-year project on which a demonstration plant of developed technologies of 5 ha of surface will be installed, with capacity to produce up to 300 tonnes per year of microalgae and by-products.

The objective of the SABANA project is to facilitate collaboration between companies and research centers for the development of commercial processes based on microalgae, especially focusing on the production of valuable compounds for agriculture and aquaculture, also integrating the treatment of wastewater in the process.

Likewise, the project is intended to develop processes to obtain feed for aquaculture to increase its sustainability and profitability.

SABANA project’s purpose is to be able to obtain new biofertilizers and biopesticides as alternative to the chemicals currently used in agriculture, which will allow better fruits and vegetables not only to be obtained but also to be more sustainable and safe for the consumer and the environment. Also, SABANA is intended to develop processes for the production of microalgae that can later be incorporated into aquaculture feedstuffs to reduce the use of fishmeal and fish oils that are increasingly scarce and unsafe due to the exhaustion of fisheries resources. Microalgae biotechnology can thus contribute to improving the quality of foods and, above all, to increasing its sustainability, and thus to safeguarding our resources and taking care of our environment.

After 18 month of development, the project achieve very successful results as recognized by external reviewers visiting the facilities at the University of Almeria (DEMO R&D). It was demonstrated that selected microalgae strains are really valuable for the production of bio stimulants and biopesticides 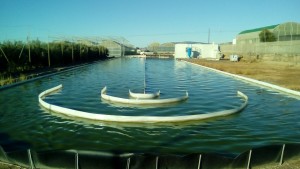 , useful to increase the yield and safety of foods production by agriculture. Moreover, also microalgae biomass demonstrates to be useful to improve the quality of aquafeed currently used in aquaculture. These microalgae can be efficiently produced in large open reactors on a sustainable way, thus minimizing the energy consumption and the uptake of resources, thus operation in fully recirculation mode allows to achieve zero emissions processes. Moreover, the same products can be obtained when using wastewater as culture medium thus allowing to treat this effluent and to recover nutrients on it contained. The developed technologies for harvesting and processing demonstrate to be efficient at large scale, the equipment provided from GEA allowing to perform these operations at stable conditions with maximum yield.

The end products obtained after 18 months of activities are being used in field trials both for agriculture and aquaculture applications.

In agriculture the increase of crops production up to 10% has been measured (tomatoes, pepper), with additional reduction of fertilizers requirement of 12% by larger efficiency of the plants to uptake chemicals fertilizers provided. Biopesticides produced demonstrate to reduce up to 70% the prevalence of most frequent phytopatogens of greenhouse crops, especially fungi, thus avoiding the necessity of using Cu-based pesticides which has been demonstrate to be toxic. 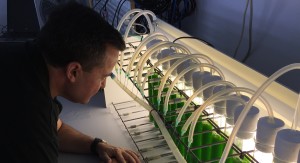 Concerning aquaculture applications, although the inclusion of dry microalgae biomass in aquafeed has been previously demonstrated to increase the sustainability and quality of aquafeed, on SABANA project it was also demonstrated that wet biomass if adequately processed provide including better results. Thus, the growth rate and efficiency on feed conversion by fishes slightly increases when adding up to 5% of microalgae biomass, but the major effect is observed in the improvement of health of fishes, thus reducing the necessity of providing antibiotics and producing healthier fishes.

On the next months a complete 1 ha pre-commercial facility will be installed and operated by Biorizon Biotech (DEMO1), next a 5 ha facility will be built by FCC Aqualia (DEMO5). These demonstration plants will allow to obtain commercial products that will be evaluated in real markets, thus completing a development platform for microalgae biotechnology in Spain and Europe. The existing DEMO R&D facility will support further developments on the field of microalgae biotechnology, today it being a “Training Center” to promote and facilitate the collaboration and development of skills of both companies and research institution, in addition to students. Thus, this Training Center is open to professionals and students, different courses being performed on it, in addition to provide an online access service to the information generated during the project. Experts from all over the world will collaborate and work day by day in fields as diverse as biology, engineering, computer science, agriculture, aquaculture as well as entrepreneurs.

This project is funded by the European Union under the “Blue Growth” program, focused on the sustainable use of marine resources, and it is one of two European projects approved in this call. The project has a budget of 10.6 M € and it is led by the University of Almería, but also collaborating relevant companies as FCC Aqualia and Biorizon Biotech of Spain, Agricola Italiana Aliment 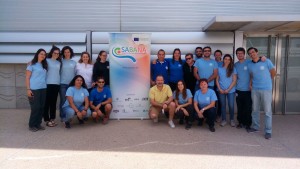 aria and the Italian Consortium of Biogas of Italy, and GEA from Germany. In addition, other prestigious research groups such as the University of Milan in Italy, the University of Las Palmas de Gran Canaria in Spain, the Karlsruher Institut Fuer Technologie in Germany, the Szechenyi Istvan University in Hungary and the Mikrobiologicky Ustav in the Czech Republic also participate in this project. In addition to the companies and universities mentioned, the project has the support of the Fundacion Cajamar which also perform works in this field during the last years, as well as various institutions such as the Institute of Agricultural Research and Training Fishery, Food and Production Fisheries (IFAPA), the Ministry of Economy and the Ministry of Environment and Spatial Planning of the Regional Government of Andalusia, as well as the Subdelegation of the Government and the City of Almeria.

All the information about the project can be consulted through the website www.eu-sabana.eu as well as in social networks through “sabana.eu”