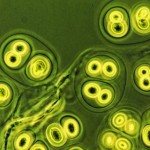 The  All-gas project, co-funded by the EU with the FP7 programme to convert algae into energy using wastewater, has successfully grown its first crop of algae biomass at its site in Chiclana, Southern Spain. Launched in May 2011, the €12 million five-year project has already completed its pilot phase  in a 200 m2 facility and a one-hectare prototype is under construction, while in the  final phase the area of algae cultivation will be increased to 10 hectares.

In the All-gas project, wastewaters as well as CO2 generated from biomass boilers are used to feed algae, which in turn are converted into biogas and then purified into biomethane, while CO2 is recycled. By 2016 the biomethane produced should be enough to power 200 NGV vehicles such as public buses and garbage trucks in the region of Cadiz.

“This original new approach to bioenergy means that Spain’s 40 million population could power 200,000 vehicles every year with a single toilet flush,” said Frank Rogalla, project coordinator. “The All-gas project is going to change the face of wastewater treatment by generating a valuable energy resource from what was previously considered undesirable waste.”