You Are Here: Home → From waste to reclaimed water and biomethane for transport: LIFE Methamorphosis project

From waste to reclaimed water and biomethane for transport: LIFE Methamorphosis project

Through the use of innovative technologies, the LIFE Methamorphosis project enables to obtain reclaimed water with lower energy consumption and also to produce biomethane from municipal and agro-industrial waste for the transport sector.

LIFE Methamorphosis is a project co-funded by the European Union within the framework of the LIFE Programme, to promote the environment and to prevent climate change. The project is coordinated by Aqualia with the participation of Metropolitan Area of Barcelona, FCC Environment, Naturgy, Institut Català d’Energia, and SEAT Technology Center.

As part of the LIFE Programme, the main objective is climate change mitigation, by reducing energy consumption and favouring the production of biomethane in waste treatment plants, in line with the circular economy guidelines promoted by the European Union. Compared to conventional fuels, the use of biomethane drastically reduces greenhouse gas emissions and contributes significantly to sustainable mobility.

To recover energy from both municipal and agro-industrial solid waste and to obtain biomethane, two industrial-scale demonstrations have been implemented: the UMBRELLA and the METHAGRO prototypes.

The UMBRELLA prototype, managed by Aqualia, located in the municipal waste treatment plant of Montcada i Reixac (Barcelona), optimizes energetically the treatment of the complex wastewater coming from the digestion of municipal organic waste. Innovative anaerobic and autotrophic processes are applied in series: an anaerobic membrane bioreactor (AnMBR) and the ELAN® system for autotrophic nitrogen elimination.

The AnMBR system allows the elimination of organic matter from wastewater without external supply of oxygen, which significantly reduces energy consumption, linked to ultrafiltration membranes to remove all suspended matter. In addition, the ELAN® system, patented by Aqualia (EP2740713 A1), replaces the traditional nitrification-denitrification process to eliminate nitrogen, lowering the energy and cost of aeration. Globally, the goal is to achieve a 70% less energy consumption than conventional wastewater treatment.

Finally, the produced biogas is treated by a membrane system and subsequent cleaning and refining in the ABAD Bioenergy® (EP 15382087.3), an absorption-adsorption process also patented by Aqualia. This technology reduces installation and operation costs, while obtaining a quality biomethane (> 89% CH4) suitable for vehicular use, with a current capacity of 1.8 Nm3/h. 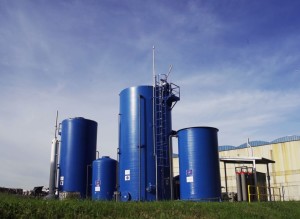 The METHAGRO prototype, managed and operated by Naturgy, is located at the Porgaporcs agro-industrial plant in Vilasana (Lleida) and develops and demonstrates a potentially viable option for pig slurry treatment plants that could enable them to reopen. METHAGRO treats the biogas produced in the anaerobic co-digestion of pig slurry generated at the farm and organic waste produced in the area. By adapting and optimizing membranes to upgrade biogas to high quality biomethane for vehicular use or network injection, the current environmental impacts of pig slurry plants are reduced, promoting a circular economy in the treatment of this waste.

The membrane system requires that first moisture is removed by cooling the biogas to approximately 5ºC. Then, contaminants such as hydrogen sulphide, siloxanes and volatile organic compounds are eliminated using three active carbon filters. The biogas is then compressed, and the membrane separates carbon dioxide from methane. The result of the process is a gas rich in methane ([CH4]> 95%), suitable for vehicle use and natural gas network injection. One of the advantages of the technology is that it works without the addition of chemicals, at a relatively low use of energy. This prototype has a capacity to produce 135 Nm3/h of biomethane.

The biomethane from both prototypes meets the standards for vehicular fuel, according to UNE-EN 16723-2, and is being tested in four SEAT vehicles driving a total of 120,000 km. At a later stage, urban solid waste collection trucks of FCC Environment will use this biomethane, to evaluate its effect as a renewable and sustainable fuel in replacement of fossil natural gas. Finally, the biomethane produced is being assessed for injection into the natural gas grid in compliance with UNE EN 16723-1.

The implementation of the Methamorphosis prototypes not only promotes an efficient use of resources, but it also contributes to protect and improve the quality of the environment.

Using biomethane in the transport sector eliminates the CO2 emissions of fossil fuels and reduces NOx contamination by 85%, compared to diesel vehicles. In addition, the energy efficiency of the new technologies significantly reduces the electricity consumption of the processes and, therefore, associated costs.

By developing and demonstrating technologies, methods and instruments of innovation, the LIFE Methamorphosis project is a contribution to the shift towards sustainable urban mobility and the development of cities of the future, being low in greenhouse emissions and thus atmospherically cleaner.

During EU Green Week 2019, the LIFE Methamorphosis is organising a free guided tour to both prototypes on 15th and 16th of May. This event is open to anyone who wants to know more about the project.