You Are Here: Home → Funding opportunities for Bio-based Industries in 2019

Funding opportunities for Bio-based Industries in 2019

Portugal is paving a way in the BBI program and the successes achieved by the Portuguese entities over the years reflect the efforts that have been made at national level and the international recognition of Portuguese entities. Since the establishment of this initiative in 2014, Portuguese stakeholders immediately flagged interest in supporting the establishment of sustainable and competitive bio-based industries and value chains in Europe, not only actively participating in the BBI calls for proposals but also getting involved as a member of the Bio-based Industries Consortium (BIC), the private partner of this public-private partnership: BLC3 and A4F SA – Algae for Future as Full Members and RAIZ as Associate Member.

After 6 years and 5 calls for proposals, BBI JU has already provided €602 million of funding to 101 projects involving 1179 beneficiaries from across large industry, SME, academia and other organisations spread over 35 countries. In this moment 18 Portuguese entities (> 60% coming from the industrial sector) are beneficiaries in a set of 16 BBI projects, mainly in Research & Innovation Actions (> 60%) dealing in particular with forest biomass feedstock, and one is also acting as coordinator (GLOBAZ SA) of two support actions focusing on consumer awareness (BIOBRIDGES) and on knowledge gathering (LIFT).

The last call for proposals

The 2019 BBI call for proposals is the sixth in a total of seven calls planned to take place between 2014 and 2020, running from April until 4th September 2019 with an indicative budget of €135 million. It offers funding opportunities for cross-collaboration between a wide set of stakeholders along the entire bio-based value chains (including primary production and processing industries, consumer brands, SMEs, research and technology centres and universities). Driven by the Vision and Strategic Innovation and Research Agenda (SIRA) developed by the industry, the 21 topics presented in the 2019 call aim to foster the supply of sustainable biomass feedstock, optimise efficient processing for integrated biorefineries, develop innovative bio-based products for identified market applications and create and accelerate the market uptake of bio-based products and applications.

Bioeconomy in Europe and Portugal

Bioeconomy is gaining increasing relevance in the international political agenda, in alignment with the objectives of the Circular Economy and the recent update of the European Bioeconomy Strategy (2018) proposes the elaboration of national and regional strategies in this field. Bioeconomy elements are recurrent in the national and regional Smart Specialisation Strategies and play an important role in the National Ocean Strategy (2013-2020) and in the R&I Agri-food Strategy (2014-2020). Besides, inter-ministerial initiatives, such as the Circular Economy Action Plan (2017-2020) and the National Plan for the 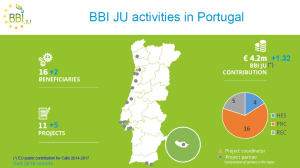 Promotion of Biorefineries (2017-2030), also demonstrate the relevance of bioeconomy in Portugal. In this context, Portugal is now in a process of developing a national strategy for the bioeconomy.A roadmap and a concept note were launched in the CASA workshop on Bioeconomy (May 2019), as an initiative of the Ministry of Agriculture, Forest and Rural Development performed by INIAV (National Institute for Agrarian and Veterinarian Research) and GPP (Planning, policies and general administration office). The target sectors already identified are: food (agriculture and food industry), forestry, fishing, bioeconomy services. In addition, a Blue Economy Roadmap for Portugal (April 2019) was developed by the H2020 BLUEandGREEN project and involving CIIMAR, BLUEBIO ALLIANCE and Fundação Oceano Azul.

As a consequence of the growing interest in BBI, an Info Session was organised by the Office for the Promotion of the EU Framework Programme of the Portuguese Innovation Agency (ANI, Agência Nacional de Inovação), in partnership with the Portuguese Industrial Association (AIP, Associação Industrial Portuguesa) – Enterprise Europe Network (EEN-Portugal). The session was specifically designed to present and discuss the funding opportunities offered for the bio-based industries in 2019, namely in the context of the BBI 2019 call for proposals.

Built on a previous session organised by the BBI JU office and dedicated to policy discussions around the potential of the bio-based sector and the role of bio-industries towards a circular bioeconomy, this session focused on the presentation of the main achievements of the BBI initiative, on the strategic 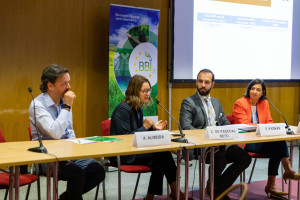 directions, areas and novelties of the 2019 call and on orientations towards the preparation of a good proposal. Mainly dedicated to the Portuguese community (>50% of the participants, of which 26% from the industrial sector and 19% from the academic sector), but willing to explore the internationalnetworking opportunities offered by the EUBCE (~20% EU Member States + Associated Countries and ~17% Third Countries), this session also involved the presentation of BBI initiatives and activities in Portugal and a panel discussion around national success stories.

This Info Day attracted a high level of interest from a wide range of stakeholders willing to prepare proposals to the upcoming BBI calls for proposals and to contribute to the development and deployment of the bioeconomy in Portugal.