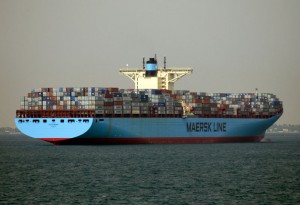 Shipping giant Maersk has announced an investment into two biomass research to reduce its bunker fuel consumption. The two projects will focus on realizing the marine fuel potential through one of the worlds most abundant and sustainable biomass resources: lignin.

In February, Maersk signed a memorandum of understanding (MOU) with Progression Industry—a spin-off company of Eindhoven University of Technology—to develop a viable marine fuel from lignin that meets stringent parameters on price, technical performance, sustainability and emissions.
A separate project called ‘Biomass for the 21st Century’ is co-funded by the Danish National Advanced Technology Foundation and involves Maersk , DONG Energy and several other companies and academic institutions.

The agreement between Maersk and Progression Industry states that if Progression can produce a lignin based fuel that meets Maersk’s criteria then Maersk will buy 50,000 tonnes of this fuel.

“For the past 75 years, the shipping companies have used oil, but looking at the next 75 years this is likely to change. In the longer term oil is simply going to run out, so we need to start looking for alternatives,” says Jacob Sterling, head of Environment and CSR in Maersk Line.