You Are Here: Home → Next generation of biofuel for the transportation sector – The Heat-to-Fuel Project

In 2013, transportation corresponded to 31.6% of Europe’s final energy consumption. Still today, the source of this energy depends to a large extent on fossil fuels import, with diesel and kerosene as the two major fuels for heavy trucks and air transportation. Being the sector of transportation crucial and relevant for EU economy, the new challenge is therefore to understand how to reduce carbon emissions in this important sector. A possible solution and alternative to fossil fuel is represented by the decarbonised production of diesel and kerosene, proposed and carried out by the project Heat-to-Fuel. Its aim is indeed to spearhead EU’s research in grasping the opportunity to provide efficient technologies and processes for decarbonised fuels to be used in the transportation sector.

Description and objectives of Heat-to-Fuel

Heat-to-Fuel – full title Biorefinery combining HTL and FT to convert wet and solid organic, industrial wastes into 2nd generation biofuels with highest efficiency – is a project funded by European Union’s Horizon 2020 research and innovation programme under Grant Agreement nº 764675. It is carried out by 14 partners from across Europe that aims to deliver the next generation of biofuel production technologies supporting the de-carbonisation of the transportation sector.

Heat-to-Fuel partners possess over 100 years of combined sectorial expertise and experience in the production of biofuels, and they will bring into the project the leading-edge demonstration facilities based on key industry and academic partners.

In numbers, Heat-to-fuel aims to:

These overarching objectives will be achieved thanks to the integration of novel technologies in Heat-to-Fuel together with innovative activities on design, modelling, development of hardware and processes, testing and life cycle analysis of a fully integrated system.

At the end of the project, the know-how acquired will allow scalability at a demonstration level before commercialisation, representative of the next generations of sustainable biofuel technologies.

Fischer-tropsch (FT) and aqueous phase reforming (APR) are promising technologies for the efficient production of 2nd generation fuels. But similarly to the situation of many other biofuel

technologies, their economic border conditions don’t allow their implementation. The radical innovation of combining an APR with a FT reactor is the basis to overcome this barrier.

As shown in the Heat-to-Fuel process scheme, the organic waste feedstock is separated into two streams, the “dry” and the “wet” route. Several questions concerning the process specification have been answered by fundamental research performed during the first year of the project. The results show that the Heat-to-Fuel process is in the position to handle any organic waste feedstock; there are just some minor limitations within gasification, mainly concerning the physiochemistry of feedstock’s ash. For this reason, several feedstocks are tested in three different scales at the moment in Poland, Spain and France. The solution for this issue will be the key to unlocking the main potential of Heat-to-Fuel biorefinery. 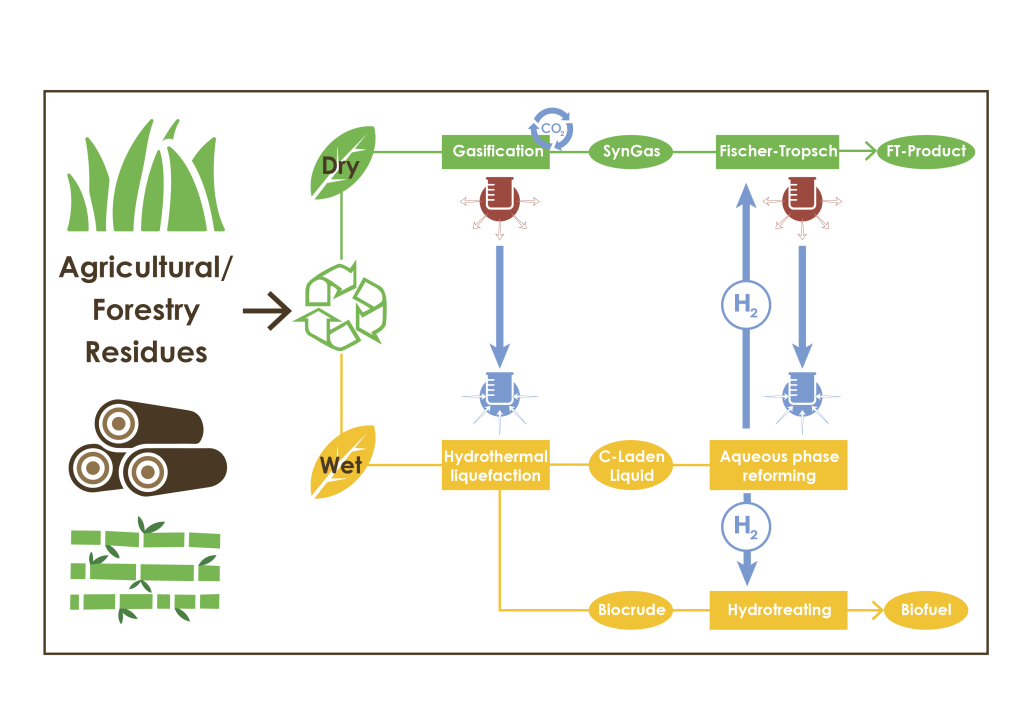 On the other hand, wet organic wastes (i.e., from hydrothermal liquefaction or other streams) can be conveniently treated with APR to produce renewable H2.

There are a lot of synergies between these two conversion platforms. In general, termal conversion of organic waste feedstock often demand large quantities of hydrogen, so production of H2 from C-laden waste water is of large benefit. Another positive effect of the combination APR-HTL is that the waste water of HTL is treated within the process itself, so no additional waste streams are generated.

Besides the mass integration, a perfect heat integration is at the moment under development. As shown in the scheme, the dry route is exothermic, whereas HTL and APR lack this enthalpy. Thus, conversion of both dry and wet organic wastes can be integrated with mutual advantages. Using the synergies between these technologies maximizes the total process efficiency. Thus, Heat-to-Fuel’s aims will be met thanks to the diversification of feedstocks available for production of biofuels, reducing the supply costs and upgrading the conversion efficiencies.

Heat-to-Fuel potential in the HTL framework

In the perspective of hydrothermal conversion processes, the Heat-to-Fuel approach features some peculiarities which makes it very promising. Heat-to-Fuel focuses on the conversion of the lignin-rich co-products originated as a side-stream of lignocellulosic ethanol production facilities, a biofuels production process on the way to full commercial scale in the EU and abroad in the coming years. The proposed approach aims at recovering the organics left in the water phase after the conversion of biomass in HTL as hydrogen, by means of an advanced catalytic process operating at mild conditions.

From a practical point of view, the project commitment’s is twofold. On one side there are the activities of RE-CORD, partner in charge of HTL process development at lab/pilot scales – batch tests in micro reactors and continuous trials in a distinct set-ups, specifically built within the project. On the other side there is the work carried out by POLITO, which applies the catalytic process known as “aqueous phase reforming” to generate hydrogen from the carbon-laden water originated from HTL and generally considered a waste to be dealt with.

The Consortium of the Heat-to-Fuel project is fully engaged and committed in the organization of the HTL workshop since its inception, and a specific team was set up encompassing the coordinator (GET), a technical partner (RE-CORD) and the partner in charge of the project’s communication and dissemination activities (R2M). Gathering together key technology developers, stakeholders and policy-makers from both Europe and overseas to discuss the joint opportunities, the market perspective and the policies needed to speed up the market uptake of a technology with such great potential for the EU sustainability goals, makes this event a unique opportunity.

The Heat-to-Fuel project will participate in the Expert Workshop: Potential of Hydrothermal Liquefaction (HTL) routes for biofuel production on November 19th, 2019 in Brussels with the aim of highlighting the state of art and challenges for this promising conversion technology. The partners will illustrate the status of the current activities and the prospects for industrial uptake of the processes. Signup for the workshop and join us in Brussels.