You Are Here: Home → Integrating bio-liquids into existing refinery processes – The 4Refinery project

Started in May 2017, the 4-year project will develop and demonstrate the production of next generation biofuels from efficient primary liquefaction routes, integrated with upgraded downstream (hydro)refining processes, to achieve overall carbon yields of >45%. The consortium – composed by SINTEF, CNRS, BTG, Repsol, AAU, E4tech, VTT and MOL – aims for a successful deployment into existing refineries, including the delivery of a comprehensive toolbox for interfacing with existing refinery models.

The main objectives of 4REFINERY 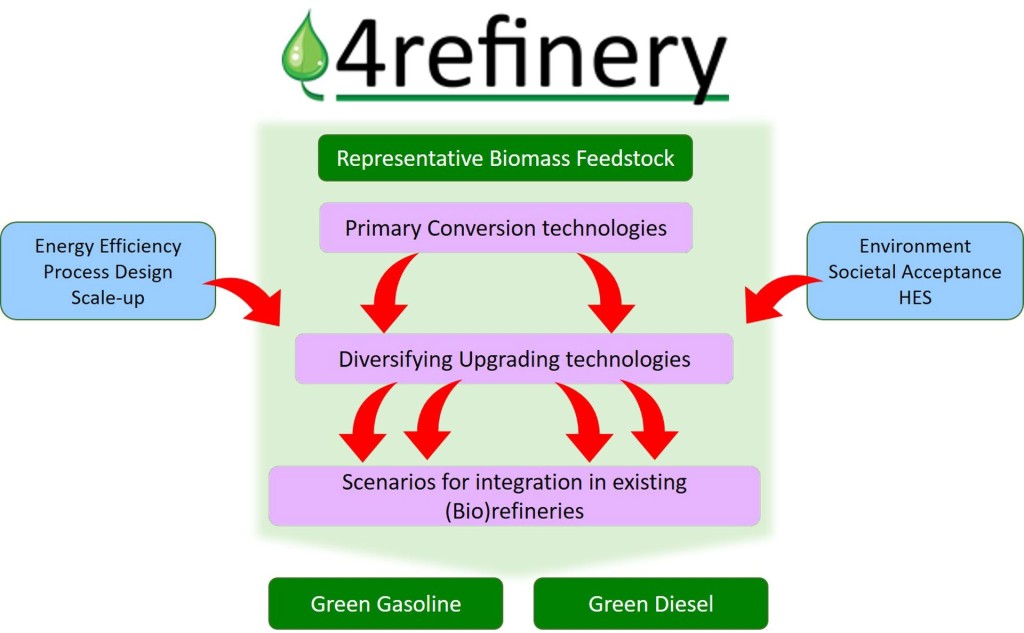 The project focuses on the transformation of bio-liquids obtained from fast pyrolysis and hydrothermal liquefaction into advanced biofuels, through intermediate process steps combined with downstream co-processing technologies. The goal is to bring these technologies from TRL3-4 to TRL4-5. The project will establish the relations between product properties, the quality of renewable feedstocks and all the  relevant process parameters along the value chain. The analysis of these combinations will allow a full understanding of the influence of feedstock and treatment processes on the final product characteristics. By utilizing inexpensive biomass and applying low-capital cost technology at small-scale, the aim is to reduce both the costs for scaling up the processes and the operational costs. The use of existing infrastructures facilitates the rapid implementation of new developments at commercial scale and increases the competitiveness of the biofuel compared to fossil fuels.

4Refinery has a focus on HTL as one of two main conversion technologies with the aim of having the greatest flexibility in the conversion of a diverse range of European biomass feedstocks into appropriate intermediate bioenergy carriers, for their further integration into conventinal refinery processes. The project will investigate the range of feedstocks that can be converted by HTL and the optimal process conditions for producing refinery compatible HTL-liquid intermediates. It will also provide valuable insight to and link between, the lab  and pilot scale application of the process and the necessary steps for increasing the compatibility with the  the value-chain.

Promising results from the ongoing activities

Specification and limits for target fuels, testing protocols, benchmark and key performance indicators were established. Twelve value chains were selected for techno-economic assessment and eight of them will undergo detailed analysis. Mass, energy and elemental balances for the pre-processing steps of both fast pyrolysis and hydrothermal liquefaction (HTL) have been retrieved. For the HTL process, a life cycle analysis (LCA) with 60% heat recovery has been developed. More than 100 litres of an initial reference stabilized pyrolysis oil (SPO) and 60 kg of HTL bio-liquids have been produced so far and were delivered to partners. The two reference bio-oils are currently being investigated in alternative co-refining steps, in order to establish the basis for selecting the optimal co-refining routes, which depend both on the feedstock and on the end-use application.

The major co-FCC and co-HDT refinery processes were explored with tests carried out at lab and pilot scale. This has involved the co-refining of both pyrolysis and HTL bio-liquids produced from three types of feedstock: forest residues, eucalyptus and straw. The current results of the tests involving bio-liquids from the pyrolysis route indicate that while a mildly treated pyrolysis oil will be sufficient for integration via the co-FCC route, a more severely deoxygenated treatment of the pyrolysis bio-liquid is required for the alternative co-hydrotreating route.

The final results from the project will provide an understanding of the influence of the main parameters on the fuel quality and will optimize the overall primary conversion steps and co-refinery processes for the production of biofuels. Moreover, the results will move technology from lab-scale to pilot scale, allowing for further investment in technology scale-up relevant to industrial implementation. The data generated (energy/mass balance, process efficiency, links between process parameters) will be further used for accurate modelling, and feedback from this modelling will be considered for further process developments. The detailed techno-economic assessment will indicate the most interesting value chains for co-feeding bio-liquids into existing refinery assets and three to four of those value chains will be used as a starting point for developing business cases. TEA and life cycle analysis (LCA) will deliver scenarios allowing refiners to make the best choice for integration into refineries. Supply chain and market assessment will give an estimation of feedstock costs and sensitivity, define supply chain logistics, market characterization including potential barriers and defined pricing strategy.

The results from the project will contribute to increasing the share of bio-based carbon in conventional fossil fuel refinery products and thus reducing the greenhouse gas emission and environmental footprint of refinery processes. Estabished value chains can contribute to the creation of new jobs, especially in the pre-processing steps of biomass handling, harvesting and transport, as well as in the stabilization of fast pyrolysis bio-liquids, which will be an additional process at the refinery site. Detailed techno-economic studies will also evaluate the commercial potential of the relevant value chains for implementation within Europe.

Discover more about 4Refinery at the upcoming HTL workshop

Together with other Horizon 2020 biofuel projects, 4Refinery will participate in the Expert Workshop: Potential of Hydrothermal Liquefaction (HTL) routes for biofuel production on November 19th, 2019 in Brussels with the aim of highlighting the state of art and challenges for this promising conversion technology. The partners will illustrate the status of the current activities and the prospects for industrial uptake of the processes. Signup for the workshop and join us in Brussels.

This project has received funding from the European Union’s Horizon 2020 research and innovation programme under grant agreement No 727531.

Text by Silje Fosse Håkonsen and Duncan Akporiaye from SINTEF