You Are Here: Home → A plan to achieve 100 biogas plants by 2020 in Midi-Pyrénées France 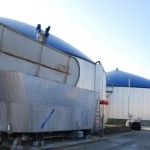 In France, 100 biogas plants will be built in the region of Midi-Pyrénées until 2020, as announced on July 30th by the President of the Regional Authority Martin Malvy. This ambitious target was set in an agreement signed by the regional authority with the minister of Ecology, Sustainable Development and Energy Philippe Martin and the minister of Agriculture Stéphane Le Foll.

The agreement foresees the establishment of a regional committee which will facilitate the development of the supply chains and will contribute to the achievement of the regional plan EMAA -Energie Méthane Autonomie Azote which was announced by the Government last March.

Since 2009 the regional authority of Midi-Pyrénées has provided support for the construction of 17 biogas plants worth an investment of 30 million Euro, 3 more are under construction and planned to start operation by 2013.