You Are Here: Home → Biomethane from waste to be used as fuel for Carrefour lorries

Biomethane from waste to be used as fuel for Carrefour lorries 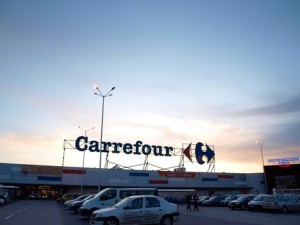 Carrefour is developing a pilot project in the Lille region (France) to test lorries running on biomethane fuel produced from recycling biowaste from its stores. The  project will be implemented in partnership with GNVERT (the sustainable mobility operator for the GDF SUEZ Group), the carrier Perrenot and the truck manufacturer IVECO.

Feedstock used for biomethane production will include fruits and vegetables, plants, baked goods, meat waste and other organic wastes. The biowaste produced by the hypermarkets will be recovered and processed in an anaerobic digestion plant producing biogas, which will be in turn purified and converted into biomethane fuel. This will be then distributedto one of the GNVERT stations.

The biomethane will be used to power three lorries delivering to around ten Carrefour stores in the North of France, having a range of almost 400 km, which is enough to cover the needs of a daily round trip.