You Are Here: Home → EurObserv’ER consortium publishes EU biomass and biogas barometers for 2011 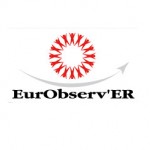 The EurObserv’ER consortium has published its annual barometers for solid biomass and biogas in the 27 European Member States for 2011.

Gross consumption of solid biomass primary energy, including imports and exports, was estimated at 80.8 Mtoe in 2011 (a drop of 3.9%). Increasing trade flows of wood pellets imported from Canada and the United States are affecting the EU biomass market.

While biomass heat production decreased, biomass electricity production continued to grow (72.8 TWh produced in 2011), driven by the additional take-up of biomass co-firing. Looking back at the statistics from the past 20 years, EurObserv’ER concludes that this drop in solid biomass energy production is very out of character. Since 1990, it has been constantly growing in the European Union, apart from a dip in 1999. In fact it more than doubled over the 1990-2010 period (39.5 Mtoe produced in 1990).

In 2011 the production of energy from biogas for electricity as well as heat applications increased in the European Union. Most of the increase in primary energy output is finding its way into electricity production that grew by 18.2% between 2010 and 2011 (35.9 TWh produced in 2011), while over the same period, biogas heat sales to factories or heating networks increased by 16%. Most of the heat produced is used directly on site for drying sludge, heating buildings and maintaining the digester at optimum temperature. Across the European Union purpose-designed biogas plants clearly dominate the field with a share of 56.7% in 2011, dwarfing landfill biogas (31.3%) and wastewater treatment plants (12%). Landfill biogas is still dominant in the UK, France, Italy and Spain, whereas “other biogas” from animal wastes and agriculture dominates the German, Dutch, Czech, Austrian, Belgian, Danish, and many of the Eastern Europe’s markets.