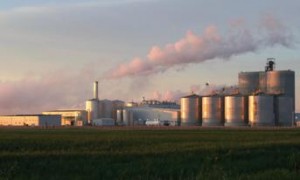 In 2009 the European Union set sustainability criteria for biofuels with the legislation of the Renewable Energy Directive(2009/28/EC, RED) and the Fuel Quality Directive(FQD, 2009/30/EC). The greenhouse gas (GHG) emission saving

achieved by biofuels must be at least 35% compared to fossil fuels; this requirement rises to at least 50% by 2017, and 60% by 2018 for biofuels produced in new installations.

RED Annex V defines default values for greenhouse gas emission savings of 22 biofuel production pathways (table I, equal to Annex IV of the FQD). If the default value is below the minimum requirement, economic operators have to make their own calculations. They will find the calculation methodology in the same Annex: total greenhouse gas emissions are the sum of emissions from cultivation, processing, transportation, distribution, and direct land use change (figure 1). However, the RED and the FQD do not fix standard values for conversion factors which are necessary to convert e.g. the amount of fertiliser used into CO2 emission equivalents – leaving insecurity to users, auditors and national regulation agencies. As various values are found in the literature, differences in the result can add up to 10%, 20% or even more percent for the same shipment of biofuel.

Table 1: Annex 1 of the Renewable Energy Directive of the European Union Dir. EC 28/2009

The project BioGrace (funded by the Intelligent Energy for Europe programme) aims to harmonise calculations of biofuel greenhouse gas emissions and thus supports the implementation of these two directives. The BioGrace consortium has recalculated the 22 default values. In the Excel GHG calculation tool it makes every calculation step transparent. Its list of standard values (table II) contains the conversion factors that were used for calculating the default values in the RED Annex V.

In the BioGrace Excel GHG calculation tool each of the 22 biofuel production pathways is demonstrated in a separate worksheet (figure 2). Input numbers shown in the cells are the ones that were used for the calculation of the default values. Economic operators may insert their individual input numbers for obtaining the actual emission saving value.

The Excel tool also features extra worksheets for those calculation steps that are not covered by the default values which are:

Last but not least users may change a process step of an existing biofuel production chain or they may add one. The track-changes-bottom allows following these modifications to facilitate verifiers checking the calculations – making the tool as flexible and transparent as possible.

The BioGrace consortium has been contacting policy makers in all 27 EU member countries with the request to make reference to the BioGrace list of standard values in their national legislations or in the supplementary technical guidelines. In the first half of 2011 three member states have done so: Denmark, the Netherlands and the UK. Moreover, five to ten member states are preparing to include a reference on the short term. The European Commission on its part has used the BioGrace standard values in the Annotated example for the calculation of an actual greenhouse gas value available on the website of the DG Energy.

BioGrace has submitted the Excel tool to the European Commission in May 2011. What make BioGrace unique, along with the Excel tool, are the detailed calculation rules. The BioGrace tool can thus be used as “add-on” to other schemes which are expected to focus on the remaining RED sustainability requirements, i.e. the origin of feedstock, the mass balance system that allows mixing consignments of raw material or biofuel with differing sustainability characteristics, and an adequate standard of independent auditing.

In July 2011, the European Commission has approved seven voluntary schemes; but many times more are still in the queue together with BioGrace. One of these seven, the German ISCC, already refers to the BioGrace standard values for conversion factors. Another two, RTRS (soy based biofuels) and the French 2BSvs, allow for using the BioGrace tool as a GHG calculator. Bonsucro and Greenergy, on the other hand, do not require actual GHG calculations apart from those for emissions caused by direct land use change; as both schemes only deal with sugarcane ethanol which, by RED default value, does meet the GHG saving minimum requirement even after 2018 when it will rise up to 60%. The company-run scheme RSBA (Abengoa) has not yet worked out its way of GHG calculations; it could, though, easily integrate the BioGrace tool. Only one scheme, RSB (Roundtable of Sustainable Biofuels), explicitly prescribes to use conversion factors drawn from another, related database. 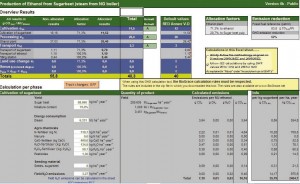 This post is based on an article written by Nikolaus Ludwiczek, Bioenergy 2020+   published  in April 2012 on BE-Sustainable Magazine.