You Are Here: Home → Nine pilot facilities across NW Europe to demonstrate sustainable energy from algae 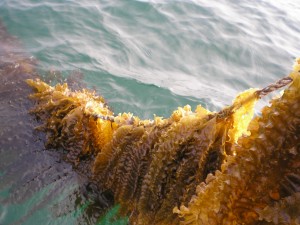 The EnAlgae project is developing sustainable technologies for algal biomass production, bioenergy and greenhouse gas mitigation, taking them from pilot facilities through to market-place products and services. This post is based on an interview to Shaun Richardson (Swansea University), project coordinator,  and Karen Mooney (Queen’s University Belfast), project manager.

What is the rationale and background of the EnAlgae project?
EC legislation (Directive 2009/28/EC) to increase the proportion of energy generated from renewable sources provides a clear incentive to reduce our current reliance on fossil fuels. Algae have long been advocated as one potential solution towards securing clean sustainable energy supplies. They can be grown in relatively simple growth systems using light and a mixture of inorganic nutrients such as carbon dioxide which, as an added benefit, they can strip from industrial waste streams. Algae also grow incredibly quickly, potentially generating high yields of biomass rich in high-grade vegetable oil for refining into renewable fuel or converting into other forms of bioenergy.

EnAlgae has received funding from the INTERREG IVB North West Europe (NWE) programme to demonstrate sustainable technologies for algal bioenergy from nine pilot facilities through to market-place products and services. The project brings together 19 partners and 14 observers across seven EU Member States and runs until June 2015. The aim is to assist policy makers, industry and investors in regards to understanding which algal production systems, standards and end-use markets are applicable to the region. To this end, the project is developing a comprehensive and user-friendly decision support tool which will facilitate decision making, identify gaps in current knowledge and capability, and provide a roadmap by which stakeholders can focus future actions in the region.

Nine pilot facilities are working in the network of EnAlgae. Can you tell us more about

their activities and how they are related to each other?

The EnAlgae Pilot Network is comprised of three macroalgae and six microalgae investments across North West Europe (NWE) that are collecting and sharing data and best practices in a standardised manner. Each pilot is providing environmental and physiological data on algal growth and productivity, with routine sampling of the growing algae and derived biomass produced under different experimental conditions. The project aims to optimise techniques that will be most suitable for the potential markets, policy/regulatory landscape, and climate of the NWE region. Resource use and costs are being captured through life cycle analyses that provide relevant sustainability and economic data for the region. These data sources on algal growth and productivity, sustainability, and economics will eventually be fed into the decision support system that will be made publically available at the end of the project.

Annual open days are held at each pilot site so that interested parties across the region can find out more about our activities and the benefits of algal biotechnology.

The project started in 2010 and has now reached nearly half of its duration. What are the main achievements so far?

The planned start date of the project was January 2011, but contract negotiations and securing match-funding actually meant that work began in the autumn of 2011. The first priority was to launch the project at a kick-off meeting in Brussels in December 2011. This meeting including contributions from key stakeholders such as the EU’s Directorates General , industry, and other algae research and technological development projects.

In 2012, pilot operators either began building new pilots or upgraded their existing algal growth and harvesting platforms; most of these are now operational and contributing data to the project. It is hoped there will be close to three year’s continuous data by the end of the project, something unparalleled in the region.

As mentioned previously, one key use of these data will be to support detailed models of algal productivity; these models will make the project’s findings from the pilot sites transferable throughout the region. Modelling experts are coding models for micro and macroalgae production which will sit seamlessly behind the envisaged decision support system.

The other key activity in 2012 involved researching the algal bioenergy landscape in Europe: technologies, market and economics, the policy arena, regulatory and sustainability issues. EnAlgae is now starting to add additional information to these benchmarks to better quantify the real potential of algae bioenergy in NWE. Production, harvesting and processing costs are being derived from our pilot sites and from surveys with other biotechnologists in the region, with the first economic model covering open pond systems already available to stakeholders for feedback.  Work is now ongoing for similar models for closed photobioreactors (PBRs) and seaweed longline systems.

Many projects are focused on microalgae only, while EnAlgae is developing research and demo activities both on micro and macroalgae. What are the pros and cons of growing seaweeds for energy compared to microbial algae?

Can you tell us more about the recent breakthroughs in making biofuels from seaweeds?

Much research has been focused on improving the yields of macroalgae which can be cultivated at sea, as well as significant work being carried out on the use of anaerobic digestion (AD) in producing biogas (approximately 60 per cent methane) from seaweeds.  AD processes whereby seaweed is mixed with another substrate, such as grass, can increase productivity particularly when mixed with a nitrogenous waste, and a Welsh company has developed an innoculum to preserve seaweed to allow for year-round supply.  Additionally, improved inoculua have been developed to improve the yield of biogas from AD of seaweed and obtain a better digestate which can be used as fertiliser for land crops, improving the applicability and economic viability of seaweed AD.  Production of bioethanol directly from seaweed is more problematic, but a recent Nature paper described a strain of Escherichia coli that has been genetically engineered to breakdown seaweed sugars to an ethanol concentration comparable to woody biomass by yeast fermentation.

What are the realistic scenarios and expectations to achieve a commercially viable production of algal-based biofuels in North West European countries?

There is huge interest in using microalgae for renewable fuels and other forms of bioenergy, but expectations need to be based on realistic scenarios that are appropriate for NWE.  This is not always the case, and it is easy to get carried away with the hype surrounding algal biofuels without really considering the full issues surrounding the scaling up of production. The case for large scale production of biofuels in the USA, for example, received a set-back in the wake of a US National Academies report that stated that algal biofuels are unsustainable using existing technologies, largely because of excessive water, energy and nutrient demands.

Similarly, the initial findings from some of the EnAlgae pilots show that we are some way off being able to produce commercially viable algal biofuels in NWE without reducing energy costs by an order of magnitude. Unless, that is, energy and fuel from algae is produced in a biorefinery context with other, much higher value, compounds being extracted during the refining process for end uses such as pharmaceuticals, dietary supplements and cosmetics. In the short-term, this is much more of a commercial reality for NWE, with any residual biomass then available for conversion into fuels or for use in local bioenergy facilities such as anaerobic digesters.

Meanwhile, algae producers  will continue to address some of the sustainability concerns associated with scaling-up production to meet the demand for cleaner fuels. The EnAlgae project hopes to play an important part in helping to meet some of these challenges and ultimately create an economic and environmentally sustainable algae-to-energy market in NWE.